Delphi Gruppen was established in 1982 by Holger Laenkholm initially focusing on competency
in the areas of computers and information technology. In 1994 Holger Laenkholm changed focus
to work exclusively with establishing projects that enable people 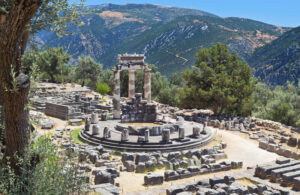 Today Holger Laenkholm as CEO and President has an outstanding network of investors and foreign foundations that makes it possible for Delphi Gruppen to raise funds for its projects and programs.

Delphi Gruppen is especially focusing on the 17 Sustainable Development Goals (SDG) set up by United Nations. The Paris Declaration plays also an import role for Delphi in its work in the mission areas.

Delphi is located in Greece north of the Bay of Corinth about 150 km. west of Athens. The Legendary tells that the god Zeus turned 2 eagles loose in each end of the world. The eagles crossed each other over Delphi and after this Delphi was regarded as the center of the world.

The ancient Delphi was ordained to the goddess of the world, Gaia, who gave her oracular reply from a cave guarded by the horrible snake, Pythos. Apollon, who was the god of light and wisdom came to Delphi riding on the back of two dolphins. The legendary tells that he killed the snake with an arrow and by this he took the power in Delphi.

The Oracle in Delphi was not the only oracle in Greece, but it is told, that it was the most reliable. Therefore, visitors came from the entire ancient world and by thus the priesthood received many information, which could be used as basic for answers from the oracle. The Oracle became forbidden by the roman in the last part of the 4th Century B.C.

The Swedish author Pär Lagerquist has written a novel of absorbing interest with the title “Sibyllen”.

In the museum in Delphi a famous bronze statue of the charioteer is placed. It originates from a group of four-in-hand drive with a carriage. It was donated to Delphi by Polyzalos from Sicily in the year 475 BC.

The first trace of inhabitants in the Delphi area dates back to the time of Mycenae (Year 4. to 11. BC). Delphi expanded drastically during 8. and 7. Century BC.

Delphi-Gruppen consists of the following companies and foundations:

Delphi-Gruppen is the main company and responsible for the groups activities. Delphi-Gruppen has establised a number of companies each of them having their own specialised task.

The foundation is registered as a public utility foundation, which can subsidize humanitarian projects domestically and internationally. The Projects will primarily be hospital, schools, housing for elderly people and infrastructure.  Development of business activities and integration projects can also be supported.

Delphi management is the group´s administrative company and the main employment organization for the staff of the company. It manages as well the individual companies as the project organization which has been established in the countries, where we are working.

The company owns the real estate facilities domestically and abroad, which contains the group activities. This goes as well for the administrative premises as the buildings, which Delphi-Gruppen has procured to contain our projects.

The company is aimed to promote the development of green energy and to spread knowledge about how to implement solid waste and waste water handling.

Delphi-Gruppen has established a company in Ghana. This company is our project organization in the country. The company is responsible for the management of the implementation and construction of our hospital projects, a university for deaf people and our residential projects.